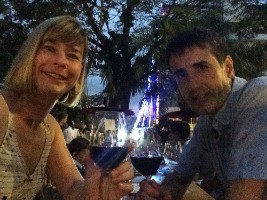 It’s my birthday today.  We aren’t planning much, just a dinner out tonight.  This time of year is always kind of crazy with lots of social things and sometimes planning birthday celebrations just feels like another obligation. Gav did surprise me at school in Friday.  I was in a meeting and one of the people I was meeting with said he had to grab something from outside and in came Gav with a cake and a bunch of people trailing behind.  So sweet.  I wish that my immediate physical response to being surprised wasn’t uncontrollable sweating, but you can’t have everything in life. 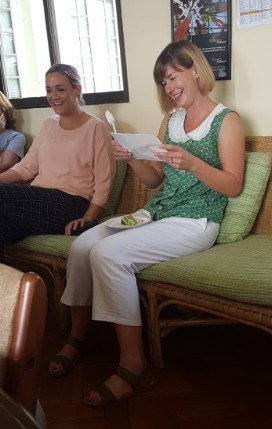 Zoom in for sweat rings.

There have been a few Christmas Market type things that have popped up over the last week.  Nothing like sweating into your Gluwein!  One was at school on Friday and featured lots of little traditionally Burmese things you could give as gifts and food stalls.  The parent association really went all out with the sparkly lights and decorations and it was fine.  I had high hopes for the German Market being put on at the Goethe Institute here in town.  I pictured those little traditional chalet stands, maybe some ornaments, German carols etc.  So I dragged Gav there yesterday evening and it was…not exactly as expected.  Think random folding tables set up in the driveway which, bizarrely, they were still letting taxis drive through so you were really taking your life in your hands to browse.   Oh well, they was a nice lawn with beer hall tables set up (nice authentic touch!) and wine.  We sat and listened to carols (that were inexplicably all in English, even Oh Tannenbaum and Silent Night-come on!) and it was vaguely Christmassy.   There was even a breeze so I temporarily stopped sweating.

Last night was our school Christmas Party.  It was held at the Director’s house and all we really knew about it was that is was a BBQ.  Beforehand there were a few texts flying back and forth about the dress code.  Every time we have been there before we have gotten instructions that the gathering was informal and the director was planning on wearing shorts, so I wasn’t too worried about it and went sort of middle of the road.  When we arrived we saw people in everything from strapless black satin to someone in an actual tracksuit so I guess anything did go!  There was a LOT of meat, a token table of veg and a dancefloor.  Well, when I say dancefloor I actually mean someone from school had brought over some anti-slip mats from the gym, but there was a DJ and he was asking for people to make requests.   Gavin has been working from home for the last few years so has missed out on the joys of an office Christmas Party.  At the first suggestion that people were actually going to start dancing, he sidled his way over to the floor and out came his alter-ego Snake Hips.  He was twirling all the ladies around and attracted quite a lot of attention.  I think the Director’s son was filming him at some point, so watch for that video to go viral on Facebook.  People started to get mad that he wasn’t asking them.  Hilarious.

There was also a backdrop for photo-taking.  Burmese people love a good photo op-when we go to the lake for a run or a walk you can’t go 2 minutes without people organising a selfie or a “spontaneous” picture of them looking pensively out over the water.  So that was very popular.  I couldn’t resist either:

Clearly we are not experts as we didn’t get the angle quite right.  Gav must have been off tearing up the dancefloor.

Weekly Mouse Update: We still haven’t caught Ei Mou Mou.  We did find out from Gav’s Burmese teacher that Ei means soft, so that’s appropriate.  I also just found out that Ei Mou Mou has been busy in the guest room closet AND thinks that my headphones are a good snack.  That’s him off the Christmas card list! 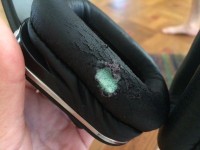 2 thoughts on “The Festivities Continue”