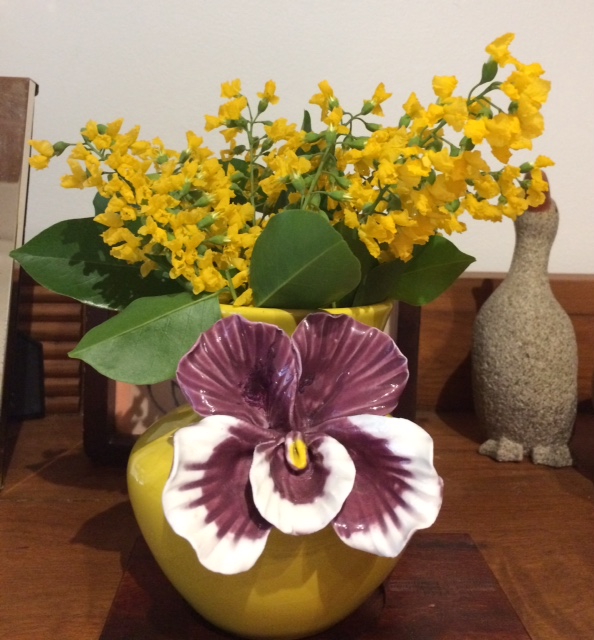 I hope you have seen the brilliant parody some guy has done of Adele’s Hello.  Even though we are not actually trapped inside here in Yangon, we are still in the midst of a lockdown which has now been extended until June.  Although we did see some road blockades and very empty streets at the beginning of the order, things seem to be slowly ramping up and people are getting out and about more.  We still need to do things like wear masks when we go to the grocery store and we are seeing signs up asking people to wear masks when outside of their houses.  It’s the hottest time of the year now though and not many people are complying with the order when walking on the streets.

Grocery shopping has lost the frenetic atmosphere that had ramped up around Thingyan.  It seems like people are back to just buying their normal amounts of groceries and not panic buying so the experience is slightly less stressful.  It still somehow feels like you are wading into a cesspit of germs though, with all the hand sanitizer, masks, gloves and cashiers behind Plexiglas.  I guess grocery stores were always disease vectors, we just were blissfully unaware.  I wonder how long it will take before shopping feels less like going into battle.

There are still plenty of…things… on the shelves but sometimes that’s because rather than let a shelf sit empty staff will just put out a thousand of something they already have.  So, plastic baggies and sponges are nowhere to be found but there is half an aisle with shelf after shelf of the same industrial brand of tin foil.  Also, there are no canned black, kidney, or butter beans but there are 10 shelves of Heinz Baked Beans.  And every kind of Goldfish cracker you could possibly want.  We had a big scare yesterday when Gav went to replenish our beer supply and could only find one hidden half empty box of Myanmar beer!  Disaster!  We scoured the shelves and the beer refrigerator and only just managed to get enough cans to fill the box.  We are now very very worried.  Will we have to switch to Heineken?  Have we not been punished enough??

Last week we had our first rains of the year which meant that the special Padauk trees bloomed in Yangon.  The first rains also mean that Nell transforms into a quivering, drooling wreck of a dog but the Paduak blooms are much nicer to dwell upon.  These trees have fragrant yellow flowers that only last 2 days and are very special to the Myanmar people.  As we took a dog walk on the morning they bloomed a local lady gave us a branch that she had collected so we could take the blooms home with us.  Everyone walked around with flowers in their hair for the day.  Two days later they had all disappeared so it was lucky we got out to appreciate them when we did! 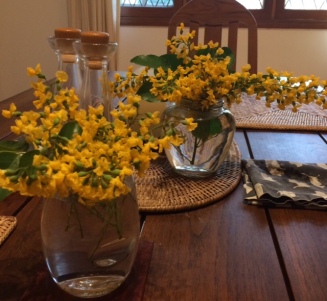 It’s also mango season here.  If you remember, our neighbors have a giant mango tree and a shed that, given the right circumstances, can act as a chute for fallen mangos to drop into our yard.  Last year we had a pretty reliable, steady supply for a few weeks and then a guy came to harvest them and it was goodbye free fruit.  Sadly this year the Mango Guy came before any of them started falling and picked most of them from the tree. We can see some smaller ones ripening on our side of the shed so fingers crossed we may still get to play our favorite game of “will it make it over the razor wire into our driveway.”

Speaking of razor wire, Gav is continuing in his quest to beautify our yard by training some plants to climb along the coils of stuff that sit on top of our wall.  One of the plants I desperately wanted to get when we moved to a tropical climate is a passion flower.  I used to be so jealous of a garden in St. John’s Wood that had trained a passion flower to cover the front wall.  Now I have two of my own!  Pretty amazing.

A few weeks ago I told you about all of our animal friends that we have made around our neighborhood.  I left out some puppies that we were feeding because I was determined not to get too emotionally attached to them as the chance of them surviving disease, starvation and traffic was not great.  Well we have been feeding them for quite a while now and 2 weeks ago one of the two went from being very playful and chubby to quite listless and skinny overnight.  She wouldn’t eat and we saw her throw up some water we brought for her.  This made me very distressed and we called our colleague who has 600 dogs at an animal shelter for advice.  She thought is could be worms and said we should call a vet for advice and possibly medication.  Nell needed her annual shots anyway, so we called her vet over to do all that and then mentioned the ill puppy down the street.  And that is how we ended up at 8pm sitting in the road giving a street dog an IV full of fluids and medicine.  Ridiculous.  And obviously not emotionally involved at all.

I am happy to say that Mabel (of course we named them, argh) has recovered nicely and is chubbing up again.  Her sister (Marge) has (we think) been taken in by someone locally as she was there one evening and not the next morning.  There were no signs of….a disaster so we are choosing to believe the best scenario.  Someone(s) else is obviously caring for the small pack as well as we have seen people feeding them and toys and a dog bed have turned up randomly.  We are still going twice a day (plus I run past her twice in the mornings) to feed Mabel and she is so adorable and friendly.  She loves to lick Nell’s face (Nell is not that into it) and will just run straight at us when she sees us coming.

We have to hope that she gets taken in as well as obviously that is much better for her than living on the streets but it will make me so sad!  That’s it, I can never stop to make friends with any puppies every again it is too emotionally taxing.  There are just these 4 cute little ones around the corner that I need to check on now that the rainy season has started…

2 thoughts on “Hello From the Inside”