Gav is at school this Saturday morning taking photos of a math competition.  I don’ t know how many action shots he’s going to be able to capture there, but hey someone’s got to try!  He got mad at me for stealing his idea last week, so I thought I would tackle a subject that there is no chance he will write about because he doesn’t have my problem.  Dealing with sweat in a very humid climate when you are already a very sweaty lady.

It’s somehow simultaneously better and worse that I had feared.  I could not really have imagined exactly how humid it is right now in the rainy season, but everyone is having to deal with it and is sweaty to different degrees.  Some people are even as sweaty as I am!  Solidarity! We like to trade tips on how to deal with it.  My favourite so far is one of the new people discovering that when he drinks a lot of wine the night before and waits to drink any liquids until he is at school he doesn’t sweat very much on the walk.  So the secret is dehydration I guess.

One major problem that exacerbates the sweat is when it is sunny (obviously).  The picture above is me 10 minutes ago, despite the fact that the weather report constantly looks like this: 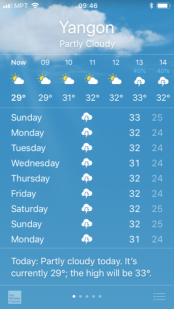 It’s as if the weather people have just given up and think “well, it’s too hard to tell what the weather will be, so let’s just say thunderstorms for the next 4 months.”  It very well might rain this afternoon, but it rarely thunderstorms (maybe 4 times since we have been here?) so I don’t understand why the icon is there every single day.  Anyway, when it is cloudy the sweat danger is a little less, but when it is bright sunny it’s a nightmare.  I’ve given up and carry an umbrella at all times.  If it’s raining, great I can use it.  If it’s sunny, equally great because I just use it then too.  Like a delicate Victorian lady.  It helps a bit.

I also carry a sweat rag around with me at all times.  The only thing worse than showing up somewhere dripping with sweat is when you have nothing to mop yourself off with.  I learned my lesson after the first week when I walked somewhere for lunch and the first thing the waiter asked was if he could bring me a towel.  Awkward!

The problem is once I start to actually sweat (not just get a little “glow”), game over.  My pores are like “all hands on deck, we gotta try to cool her off!”  And I don’t stop sweating for a long time, even if I am in a nice cool environment.  So the trick is to try to get inside into air before the real drenching begins.  Basically, I have about 13 minutes of walking in the heat before I am in real trouble.  The walk to work is 12.  God help me if something causes a detour or we have to run an extra little errand, because then it’s bad.  On a normal day I arrive in the (nice cool) library right on the cusp of the real sweat starting.  I usually have about 40 minutes before I have to leave the building (our campus is all a bunch of separate buildings so you have to walk outside to get around) to go to a class or whatever.  These 40 minutes are enough to cool back down and get everything under control.  Then I am OK for the rest of the day even if it is a scorcher as any walk would be way under the magic 13 minute mark.  But if I don’t have those 40 minutes to get everything under control it’s hard.  The other morning Gav and I wanted to stop by a coffee shop that was less than a block from school to see if we could buy some baked goods.  They weren’t open yet, so we walked back to school, but that extra 2 minutes caused a decent drenching to begin.  Then I only had about 20 minutes to cool off until I had a meeting on the 5th floor of another building.  I walked to the building, a little sweaty still but hopeful the nice cool classroom would get everything under control.  The elevator was broken, so I had to walk up 5 flights of stairs (outside) which was very annoying for me, but not as bad as for the poor 17 year old boy who just had knee surgery who was being carried up the stairs by security guards.  I was good and sweaty by the time I showed up in the classroom-which didn’t have the air on.  Also no one else was in there yet so I frantically rummaged around for something to fan myself with and tried to calm down.  Eventually other people showed up and got the air working and I managed to dry off a bit but days like that are not the best.

I’m a little hopeful that I may get used to the humidity a bit.  Half the kids at school are wearing jeans and sweatshirts in this weather.  The thought of putting on jeans makes me a little nauseous.  I have to say I am really scared of the “hot season” because every time I say that it’s pretty hot outside, old timers laugh and say “this is nothing, wait until April!”  Sob.

3 thoughts on “The Sweat Factor”