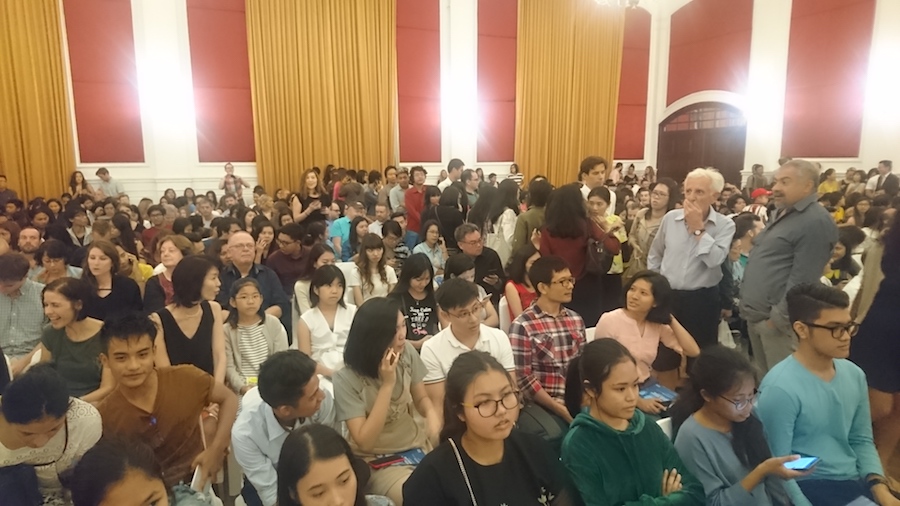 One of the things that I imagine we will most about London is the access to cultural events.  I can’t say that I miss that yet because we haven’t had time to miss anything really although Lindsey is starting to miss the cool October weather of London.  It seems weird to be thinking about upcoming events like Halloween, my birthday and Thanksgiving but without the backdrop of the Autumn.  The cool season is supposed to be starting now here but there’s no sign of it yet.  On our usual Sunday morning walk today I would say it was around 32 degrees Celsius (90 degrees Fahrenheit).

Earlier this week I found out about a classical concert being put on by the Goethe Institute.  The venue was one of the large ballrooms of the Strand Hotel downtown and oddly, the concert was free.  Tickets could be had by either going to the reception of the Goethe Institute building or simply getting them on the night.  Taxis are so cheap here that it was no problem for me to get one to pick up our tickets.  He waited for me and then drove me back and was pretty grateful for the three dollars I gave him.

The concert was on Friday night and Lindsey and I arrived separately in plenty of time for the 7pm start.  There was a long queue for people getting tickets on the night but if you had tickets you could go straight in.  This turned out to be quite fortunate as we found good seats at the half way point (think exit row) of the auditorium.  People kept coming in to the hall and it started to fill up until pretty much all the seats were taken.  I estimated that there were around 1200 seats.  Germans being Germans you’d think that the organisation would have been pretty smooth but surprisingly, people just kept coming in and wandering the aisles looking for non-existent seats.  Eventually, they just had to stand in the sides and some even sat in the aisles.  The sides had people standing 3 deep along every available space.  It was packed!  The program was a Haydn piano concerto, Mozart’s divertimento and then another piano concerto by Mendelssohn.  Interestingly, there was no interval so they just played through everything straight.  This was quite lucky in the end because getting everyone out and then back in again would have been a nightmare.  Piano concertos aren’t usually too long so we were out by around 8:30 in time for culture of a different kind.  (We went to a bar where a band were playing made up partly by teachers from the school.)  I totally enjoyed the concert as did the audience who I would say were mostly Burmese. 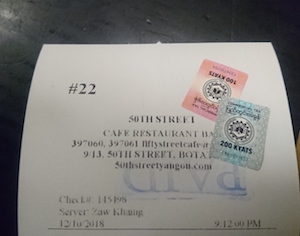 In the UK, printed receipts are starting to get faded out.  Often you can elect to have them sent as an email or for small purchases like beer, sometimes they don’t even ask you.  Not so in Yangon.  You get a receipt for pretty much everything here and many are quite formal affairs.  In addition they are in the habit of putting stickers on your receipts and sometimes not just one sticker but many stickers.  I have yet to divine the reason for the stickers but I think some might be some kind of loyalty scheme.  Get so many stickers and get a free drink or something.  These ones says 200 and 100 Kyats respectively, so maybe that’s a discount for another time.  I’ll see if I can get to the bottom of this and report back. 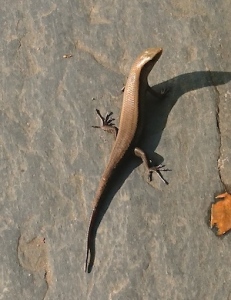 I’m not sure if it’s simply because we’ve been here longer now and are being a bit more observant or whether it’s because the seasons are changing but I am starting to notice a bit more wildlife.  The highlight was definitely spotting a hoopoe the other day.  If you don’t know what a Hoopoe is, here’s a link.  I saw one on our wedding day in Florence and it’s always been one of my favourite birds.  We also saw a new kind of lizard which was blue and yellow with a nice eye stripe.  Judging from other lizards I’ve seen in Africa it reminded of an Agama lizard but I’m not very good on lizards so this is all new.  We also saw this lizard which is definitely some kind of skink but as Myanmar has lots of kinds of skinks, I’m not sure which one this is.

I’ll leave you with this image which is our latest, fairly impulse, purchase of a kitchen table.  We were out buying carpets with no intention of buying any furniture but then Lindsey spotted it.  It’s hard to tell from the photo but the stools actually hang from under the table.  They have their own slots to slide into.  We couldn’t resist it!