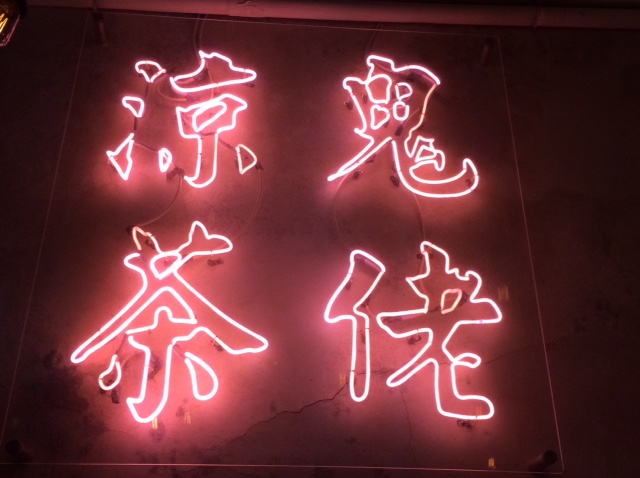 Last week I went to Hong Kong for a tech conference with two of my colleagues.  Traveling to these conferences is always fun if you enjoy the people you are going with and luckily that was true here. We set off early Tuesday morning after having a healthy debate about how far ahead we needed to be at the airport.  Stacey and I are “at least 2 hours ahead” travelers and Mike is (in his words) a “love hearing my name being called over the loudspeaker” traveler.  Stacey and I are bossy, so we won.

The school bought our tickets and none of us really looked closely at the particulars so we didn’t quite realize that it was going to take us ALL DAY to get to Hong Kong due to a layover in Bangkok.  Oh well, we arrived in the evening and all was well, except I tried to get money out of the ATM and no matter what I tried, every ATM said I had “insufficient funds.”  I got all huffy because my UK bank has been cutting my cards off randomly constantly since we moved citing “suspicious charges.”  I guess trying to buy anything in Asia = suspicious.  I called the bank (through skype, a tortuous process that I hate) and found out that all of my accounts had been frozen until I could have a “safeguarding interview.” I had a bit of a hissy fit and they agreed to unfreeze them temporarily so I was not stranded without money.  Whew.

After all that, we wandered out to find some dinner.  There was a bit of a march around the “cool” area near us, hilariously called Soho, but we ended up finding an amazing tiny little restaurant that served bao (small buns filled with different things).  One of us (Mike) became totally obsessed with this place and made us go back three different times.  We may all have team t-shirts that we can now wear for “casual Friday” at school. 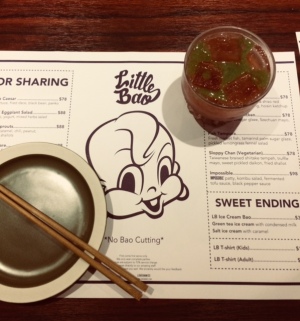 The weather in Hong Kong was not great. Rainy and “cold” for us.  The high was about 19 Celsius, which meant I put on jeans and a sweater for the first time since August!  I was worried that my feet might not be able to handle close-toed shoes since they have been living free in sandals, but I survived.  It was nice to be cold. 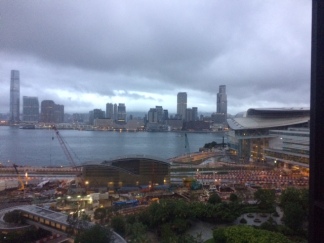 View from my hotel room-the skies looked like this the whole time.

The conference itself was pretty good. It was tech centered, but there was a lot of library stuff, especially library design.  Our school has recently decided to move forward with fundraising for a new library building, so it was nice to see what other people are doing, especially libraries that are trying to be forward-thinking and innovative.

I did manage to do a little sightseeing, but only saw a very small part of the city.  I didn’t realize how giant and spread-out the city was.  We were staying on Hong Kong island and didn’t get off to look around more.  There was a lot of shopping and restaurants, but not much else to see (the famous Victoria Peak was permanently socked in with the weather).

I did visit the Man Mo Temple.  It’s an amazing little wooden temple plopped in the middle of a very commercial district.  Inside there are tons of lanterns and so. much. incense.  There is a fog of smoke in there, and the workers all wear masks.  It’s very atmospheric!

All of those coil cones on the ceiling are also burning incense.

Our last evening we went to a crazy restaurant that a friend recommended.  They did not take reservations, so we had to line up at 5:45pm like a bunch of Senior Citizens.  The restaurant featured “snout to tail” dining which was off-putting to vegetarian Mike, but there were lots of dishes that featured neither snouts nor tails.   This was the board that you had to watch to back sure the “part” that you wanted was still available as everything is limited each evening. 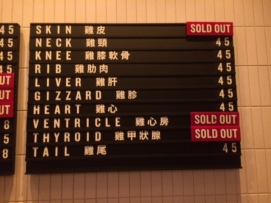 Can’t believe everyone went so crazy for “ventricle.”  We didn’t actually eat any of that. The “gizzard” made me laugh because as a kid I had a toy dump truck that I called my Gizzard.  I think my niece might have that thing now, but I loved it.

Sunday morning it was time to head back to Yangon.  We had a direct flight back to Yangon-yay!  It was basically Asian Easyjet-boo.  Also the entire flight apart from the 3 of us was a Chinese tour group which of course we were behind at check-in.  Oh well.  Also when we landed in Yangon it became immediately clear that the cool season had abandoned us. 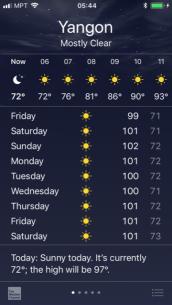 Welcome to my life for the next 9 months.  At least it is still relatively dry, so although it feels like standing inside a dryer sometimes, if you stand in the shade it’s not too horrible.  I’m still scared of what’s to come though-the locals are still wearing sweaters! How hot will it be when they move to short sleeves???