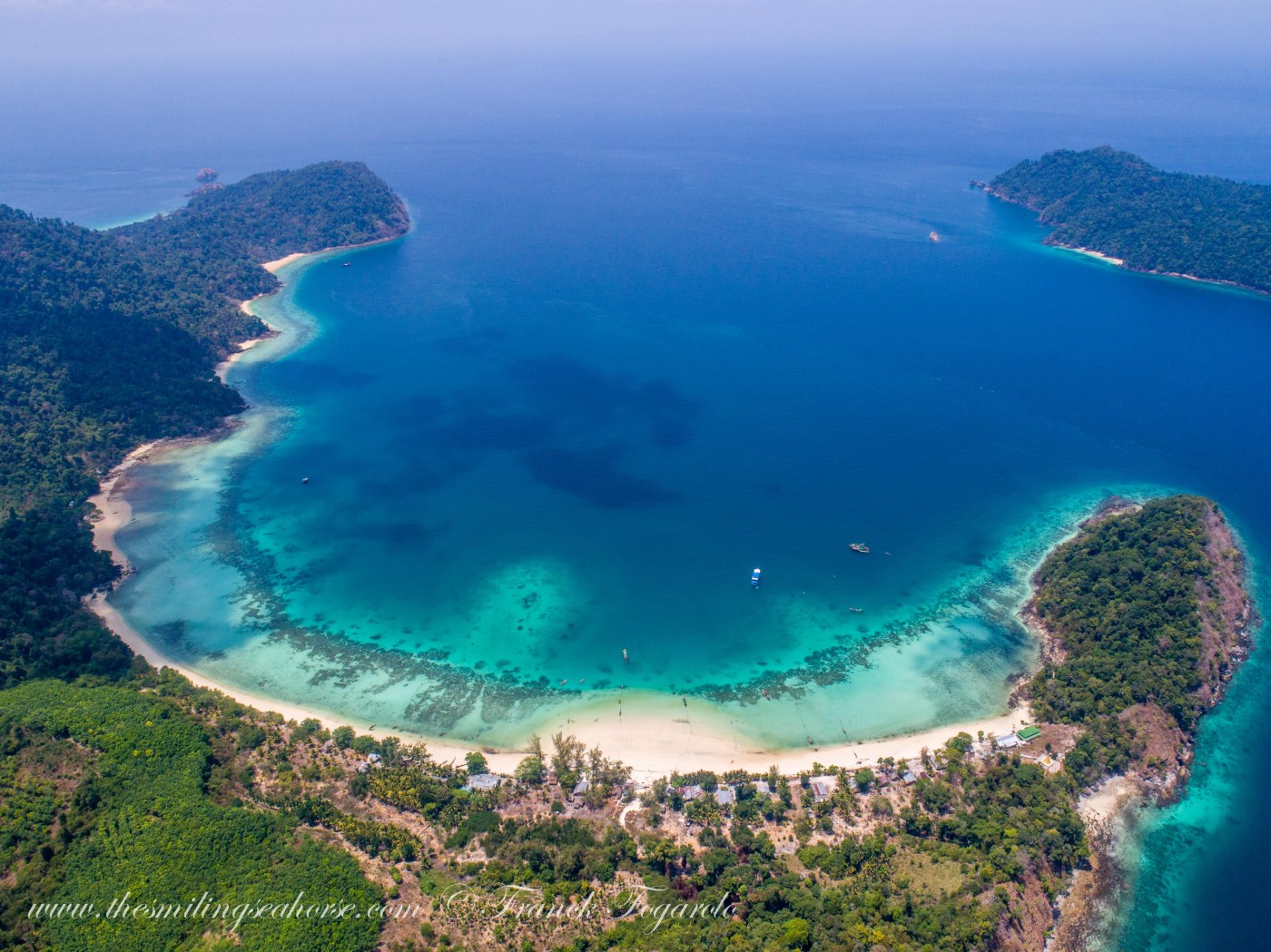 We are back from our dive trip!  We had a good time and saw some of the beautiful deserted beaches of the Mergui Archipelago.  The photo above was taken by the divemaster with a drone and you can see our little blue boat in that cove.  Our dive boat was occupied by a group from our school, a Swiss family on holiday, a French guy getting his rescue diver certification and an American who is teaching at an international school in Bangkok.  Here is the group from our school (plus a couple who used to work at our school but now work in Taiwan).

The diving was good-we saw a manta ray (bit of a fleeting sighting for our dive group to be honest, others saw it much clearer) and a whale shark (our group saw him 3 times at very close range!) as well as some smaller things like seahorses and frogfish and pygmy squid.  The coral was really beautiful and in most places seeming untouched.  Not a lot of boats visit the Archipelago due to historical difficulties in visiting the region, but we did see one boat that was visiting some of the more well-known sites at the same time we were.  The visibility in the water wasn’t great (the water is super warm, most of the time around 30 degrees C) and the current can be very strong in places, but current is what brings in larger fish and big schools of fish so you have to just deal with it! 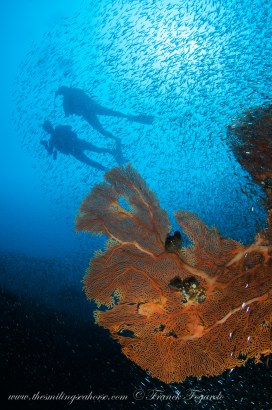 Gav and I swimming in a sea-fan forest!

At one point during a dive I was clinging on to the rocks for dear life as we crawled along a reef trying to see if we could spot some sharks.  I was very worried that Gav was about to blow off to India, 2 of our group just gave up and hid behind the reef waiting for us, and I got a bit bashed around.  The rest of the group was wearing long wetsuits, but I had opted for a shortie because it was so hot.  The long wetsuits provided a lot more protection-I managed to scrape my leg on some barnacles, stuck my knee in an anemone and brushed by ankle into some fire coral.  Whoops.  I am still in recovery.

The divemaster who was leading the group Gav and I were diving with brought a camera along and got some good shots-we did have to ask him to leave his camera on the boat after he lost 2 members of our group on a night dive while photographing random tiny things so sorry, no pic of the whale shark!

Me, coming out of same cave, for some reason doing a Mr. Burns impression?

Anyway, it was a lovely way to spend our spring break.  Diving is always pretty relaxing, all you are doing is diving, eating and napping!  Photographic evidence…

Now we are back in Yangon and only have 5 weeks left of the school year!  It is properly hot here now, getting up to 42 C or about 106 F during the day.  It is still really dry though, so although it is boiling hot I am still not as sweaty as I was when we arrived during the rainy season.  If you can stay out of the sun it’s not horrible.  What IS horrible is that the hot weather is causing a lot of power surges.  Every time the power surges, our air conditioners get tripped off by these safety boxes they are attached to.  This keeps the electricity from killing your appliances.  The problem is that there is about a 4 minute cycle that then the air cons have to cycle through before they start working again.  When the power is surging every 10 minutes, that means that the aircon is only on about half the time, and that can’t keep up with the crazy heat.  The upstairs of our house is ridiculously hot by about 6pm every day and it is making me super crabby.  Supposedly the rains should start this week, which might fix some of the problems.  We will keep you updated!

One thought on “Spring Break”