We are down to two weeks of work left before summer vacation!  All kinds of things are finishing up for the year.  For me, the biggest relief is that I am now officially done coaching swimming.For this year at least.  I’m just going to pretend that next year all of the new teachers will be eager to coach and I won’t have to.   At our last practice I told the kids we could have a game day, so everyone played water polo and sharks and minnows.  Then they got bored and asked if they could get the flippers out of the swim storage area.  Someone who has either never looked at a child’s foot or has no understanding of European shoe sizes (and did not phone a friend or ask Google) ordered about 70 pairs of swim flippers for the pool.  Unfortunately all of the sizes are 40 and above, so they are pretty much useless in a school swim program.  But that didn’t stop the kids from trying to swim with them and then being very confused when they all fell off.  Oh well, they had fun.

A few weeks ago we had a teacher appreciation day at school.  One of the best parts was that the moms brought in food they had cooked for our lunch, so we had quite the spread of amazing stuff to eat.  Some of the classes also organised thank you notes for some of the specialists, like me.  I got a few normal ones that were cute, and then I found this on my desk:

Dear Jake (who is in third grade), I am a married lady.  Sorry.  The kissy faces are killing me.

Yesterday we had our end of year brunch at a hotel near downtown.  Apparently last year it was in the evening and it got a little lairy, so the powers that be decided there would be less jeopardy if it was at 11am.  Poor Gav once again had to be the master of ceremonies.  He never gets to have fun at these things.  But everyone behaved themselves and there was the customary backdrop for your photo taking needs.  The picture above was taken by one of the Myanmar staff members who I think volunteered to take our picture so that we would leave and she and her friends could have a proper selfie session.

Our free mango extravaganza has come to an end.  Last weekend as we were eating breakfast we thought we heard the delicious sound of a mango bouncing on the roof next door.  But upon further investigation it was a guy who was harvesting them from the tree with what looked like a giant lacrosse stick.  Now we have to go back to paying for our mangoes from the store and those aren’t even as good!  Oh well, it was good while it lasted.

We have officially gotten to the time of year when the weather is just gross.  Every morning is a mad dash into the air con of the library.  It’s depressing.  My sarcastic weather app agrees: 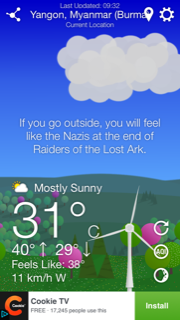 One thought on “Wrapping things up”