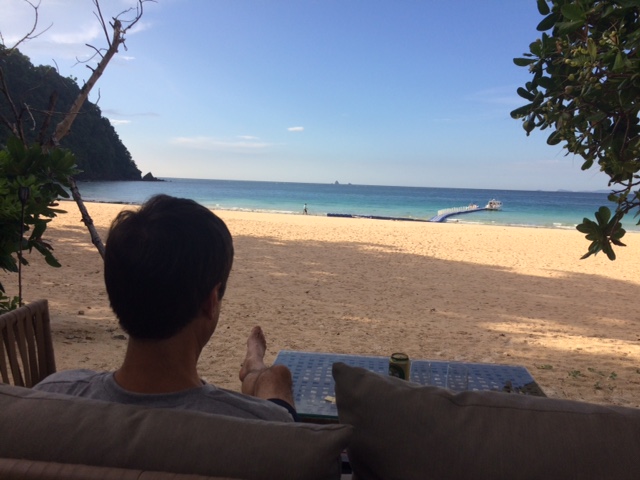 Last March at our big school fundraising gala Gav and I bid with some friends on a three night stay at a fancy resort in the archipelago in southern Myanmar.  Actually, for a while we were bidding against each other until we realised the trip was for four people and perhaps we should just work together and stop driving the price up.  Oops.  We got the trip at a hefty discount and decided that it would be a perfect place to go for Thanksgiving break.

So last Thursday we all met up at Yangon’s domestic terminal and flew down south to Kawthaung, the southernmost point on Myanmar’s mainland.  Some guys from the resort picked us up and helped us through the torturous part of internal flights in Mayamar-when the customs people want all the foreigners to line up so that they can painstakingly write all your visa information into a notebook that no one will ever look at again.  It takes forever, and for us it is even more difficult as they try to find the stamp of the last time we entered the country.  There are a lot of stamps to rule out.  We eventually got through and got driven to the dock to get on a boat for the 2.5 hour ride to the island we were staying on.

We were told we would get lunch on the boat, but one of our party had the good sense to ask if there was beer on the boat, and if not could we please stop at a store to get some?  So, fully stocked up we started the long journey. 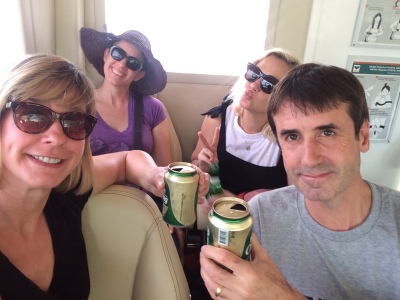 The sea was quite rough and the boat had no AC, so those beers were the last beers we drank.  We were also starving, so part way through the ride we asked if we could please have lunch.  A few minutes later we were handed a plate with three tiny triangles of sandwich with the crusts cut off.  Fancy!  But so tiny.  Gav asked if he could have his crusts back.  It’s actually a miracle that no one got seasick.  Maybe the tiny amount of food was on purpose.

We all survived and a few hours later we pulled up to the island. 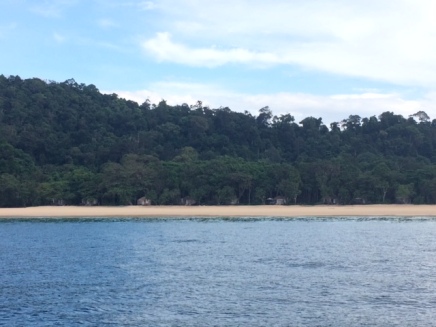 If you zoom in, you can see the huts right there on the beach-not bad!  We rescued the rest of the beer from the cooler and hurried ashore to start relaxing.  It was pretty fancy and the view from our huts was amazing. 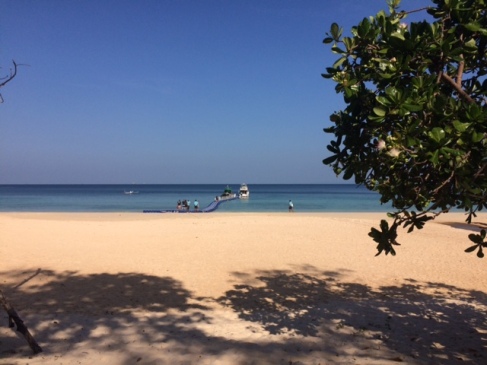 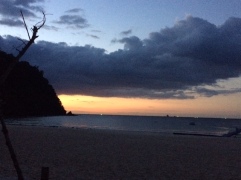 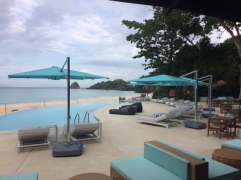 It did not take us long to discover that this was the sort of place that you could call reception and ask them to send a bucket of ice and some fries to your hut to enjoy along with your beer.  It is kind of dangerous to have a constant supply of free fries at your beck and call.  Apparently we could also order fish and chips, a burger or a salad anytime as well, but we did not try that out. 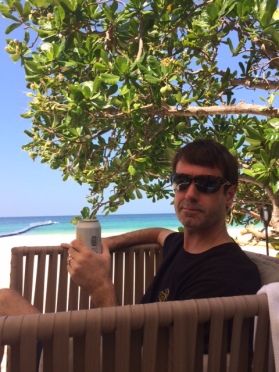 Gavin and I went diving one morning, and while the diving was pretty average it gave him a chance to try out a new mask and me a chance to try out a new computer.  Both worked fine, but Gav’s new mask has ear covers like a water-polo player to help him with his finicky ears.  No one looks cool with a scuba mask on, but the ear protectors take it to a whole new level.  Sorry I have no photographic evidence. 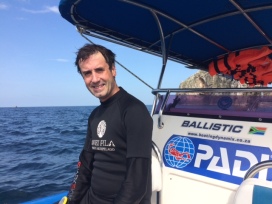 One afternoon we were sitting on our front porch and watched as the boat came in to drop off some new guests.  An older Myanmar lady walked off the boat and I said to Gav “It looks like Daw Wilma* just joined us on the island” (name changed to protect the innocent).  Daw Wilma is a science teacher at school and a bit of a legend.  No one knows how old she is, but it has to be well north of 70 and she has worked at the school forever.  She is retiring this year, which is probably a good thing as she has to wear a microphone in class for kids to be able to hear her.  This lady bore a striking resemblance.  The next morning she joined us for a “walk” (more on that later) and it turns out she used to teach at school as well and was Daw Wilma’s teaching partner! What are the odds?

One of the things that the guys at the resort suggested we do was to take a walk to another beach to do some snorkelling.  So on our second to last morning we met one of the staff members at reception and jumped into a golf buggy.  Daw Wilma’s Twin was there as well and all of our group kind of grumbled as we thought DWT would slow us down.  The golf cart dropped us partway up a giant hill and we got out to start our walk.  I did not quite realise that we had to walk up and over the whole island to get to this new beach.  Luckily we were in the shade of the forest, but the “path” we were walking on was treacherous in parts and no one had told us to bring water or to wear sturdy shoes.  The guide fell down at one point, I fell down and impaled my armpit on a small tree.  I also sweated right through all my clothing and was positively dripping wet.  Guess who never slowed down, fell down, or got her pristine white button up shirt even wilted?  DWT.  At several points, when questioned, the guide did that very Burmese thing of telling us what we wanted to hear and assuring us we were at the top only to have us round a bend and see that we were very clearly not at the top yet.  But finally we made it, 1.5 hours later to the pristine beach.  I pulled off my sopping wet t-shirt and shorts and made a bee line for the ocean where 10 minutes later I watched a guy from the hotel pick up all our belongings to move them to a boat.  I tried yelling “I’ll get my own stuff” but I just had to watch horrified as he handled my disgusting clothing.  Sorry guy, but maybe a little warning about the nature of your walk would have been handy.

Beach holidays aren’t really our thing, but it was a perfect relaxing few days with friends in a totally unspoiled part of the world.  This must have been what Thailand was like 30 years ago. 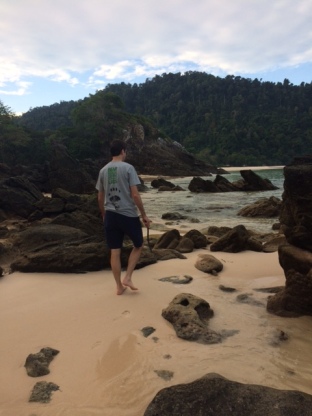 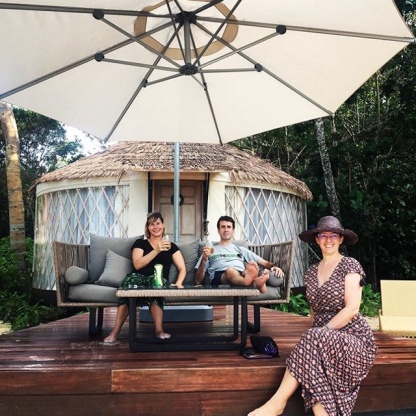 I’m not sure I will go back though.  The journey home was a bit of a nightmare-our flight was supposed to leave a 12:30 which made our boat transfer a touch close for comfort.  We knew we would make the flight but with not too much time to spare, so we spent the return (much less bumpy-new boat) journey worrying a bit about the time.  When we got off the boat, the guys on the dock said every traveller’s least favourite phrase- “I’m sorry but your flight is delayed.”  Turns out that the flight had not even left Yangon yet for its round trip journey.  So they took us to a fancy hotel in Kawthaung and we had lunch and waited.  DWT was at the hotel with her family so we took a few photos for the alumni updates from school.  All in all the journey home took 11 hours which is just too long for a four day trip.

But, in case you a feeling bad for us, do not despair.  We have only one week of school left before winter break.  Three glorious weeks with no work and we are spending it in Sri Lanka.  Can’t wait-just have to survive these next five days!