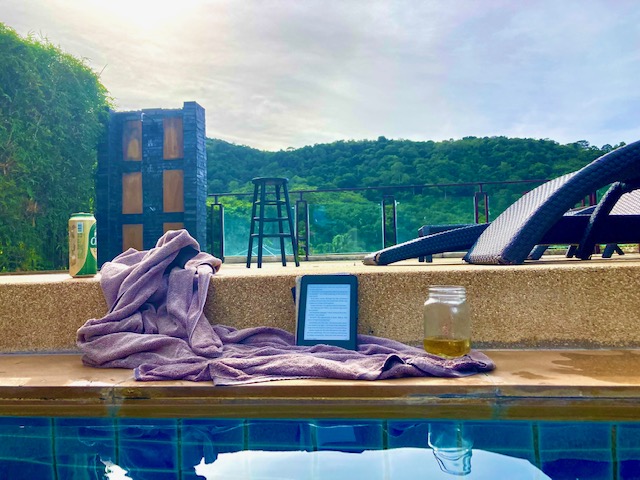 We’ve been here in Thailand for a month now and have settled into our more permanent accommodation. Way back in August when this whole adventure kicked off, I was under the impression that in order to get our Thai visas we had to let the government know where we would be staying the whole time. I am now not sure that you actually have to do that but anyway it kicked off a mad search to see if we could find someplace that would rent to us for more than a month but less than a year. Airbnb seemed to have lots of medium-term rentals that looked good so we put together a short list from what we could see and eventually picked one house that looked great. It had zero reviews, but that was true of most places on there-I think the pandemic changed how people were renting properties here and new management companies snapped up places and started listing them on that platform.

We put down a deposit and agreed to rent the house until the beginning of November. The day we were sprung from quarantine we drove to the coordinates that we were sent in the middle of a rainstorm and were met by a lady who basically opened the front door, ran around the rooms and then ran out the door again. Gav and I were a little shellshocked as, although we could recognize the place from the photos on Airbnb, it was quite clear that those photos were taken about 10 years and many, many house parties ago. Also the photographer was very gifted with angles, classic hotel strategy to lure you in. Things were a bit….tired inside-every single corner of any furniture looked like it has been bashed a thousand times, there was a giant mysterious hole in one of the sofas, etc. The house also came with one unadvertised extra:

This cat was waiting for us on the front steps and then happily marched in the front door and made itself at home. The woman who met us said it was “the owner’s cat” we think, or maybe she said “you are now the cat’s owners” because this thing would not leave. It even knew how to open the screen doors with its claws, so no matter what we did, it meowed and meowed until it could get inside and once in, it was very difficult to remove.

We started calling it Catface and despite Gav trying everything including dipping its toes in the pool when it would sneak into the house, Catface was going nowhere. Gav decided we needed to employ some Meow Management as it was very loud when we were trying to work, so we caved and just bought some cat food and accepted we were catsitters. That did the trick and now Catface has quieted down and we have a new roommate.

As with Catface, we just decided to lean into our house’s errrrr “quirks” and focus on the positives. Although inside the house it is (as Gav says) a little like being on the set of Basic Instinct and firmly in the early 90s, the outside is delightful. We have amazing views and a mature garden as well as a nice pool and a big covered porch. We bought a few things from Ikea (!) to cover some of the worst crimes and spend most of our time outside. As we explored the house further, we actually found 3 more rooms (downstairs, separate entrances) and 3 little cabin outbuildings. None of the doors are locked so we have had a good look around and there is even a weird tiny former gym in one of the rooms? It’s honestly a little like a haunted house, or as Gav likes to assume, former brothel. At some point this place was definitely a hotel as all the rooms have separate keys and those weird card things you use to turn on the A/C and electricity. But who cares when you spend all of your time outside?

The location is also great. We are on the south coast of Phuket in an area called Nai Harn beach. Unlike other places in Phuket, this area doesn’t have a lot of resorts and the people out and about around here seem to be mainly retirees and younger people who are working here. The beach is a 15 minute walk from our house and is always full of people walking their dogs and playing sports. Beach volleyball seems to be a big thing with about 5 or 6 courts set up around sunset, as is surfing. The one resort has a nice cocktail bar overlooking the beach that does half off cocktails from 5:30 to 6:30pm! There are lots of restaurants and bars within walking distance and it is all downhill from our place so I don’t even turn up too sweaty. The walk home in another story but fortunately I can jump in the pool for a quick refresher when I arrive home.

So, although I would not say that I am a beach person, so far we have thoroughly enjoyed our time at the Upscale Thai Bordello we now call home. Catface has her own bedroom where she rotates between lying on the bed, the bathmat and an office chair. Don’t tell Nell.

Now i have to go, I am late for my Sunday lunch beer on the beach. It’s a rough life!

One thought on “Island Life”