It is worth noting that Yangon was called Yangon before the British renamed it Rangoon. The same goes for the country name Myanmar. The generals did not come up with wholly new names they were merely reinstating the old names. The British conquered Myanmar largely during three wars happening around 1824, 1853 and 1885. Yangon was captured during the second of these wars. It was virtually destroyed by fire in 1841 and what had been rebuilt also suffered heavily during the war in 1853. This meant the British had an opportunity to start again and created a grid plan for the city centred around one of the pagodas. There are a few colonial era buildings that have survived well and the post office and customs house (just over 100 years old) are both still used for their original purpose. In the centre of the old town there are lots of examples of colonial architecture in various states of decay but there has also been some attempts at restoration. A large hotel probably dating from the 1920’s for instance is just being finished. 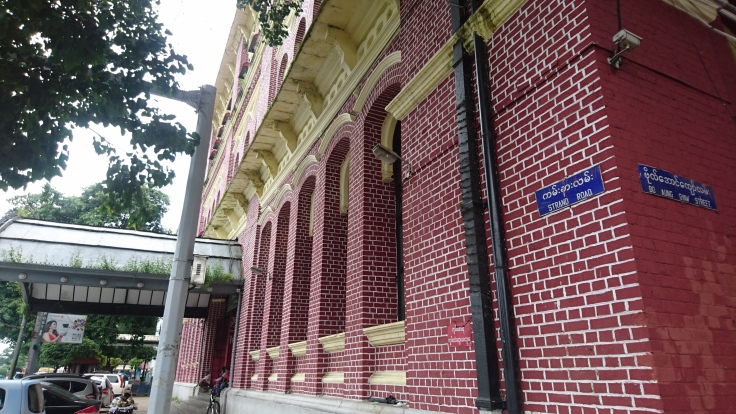 The day we took those photos we also went to a place called Helping Hands which is a kind of junkyard of old furniture. You choose what you want and they then restore it. They work with underprivileged people teaching them the trade of furniture restoration. Later that day we bought three art deco chairs from a shop connected with them so we could see the finished article. We love them and at £68 a piece we thought they were a total bargain. You can see the two pieces of furniture we are having restored. One is a great art deco glass cabinet and the other a kitchen cupboard. They are costing about £270 a piece.  I’ll post again once we get the finished items hopefully in about 2 weeks.