The rainy season seems to be tapering off a bit here in Yangon.  We have had a run of a few days with no rain at all, although the humidity is insane.  Yesterday we had a crazy downpour in the afternoon but now we are back to sun.  I think the changing weather is bringing out some “wildlife” that we are spotting around here and there!

In the mornings when I run around the lake there are hundreds of low-flying bats swooping back and forth grabbing  insects out of the air.  I appreciate the work they are doing and don’t even mind them zooming around right on top of my head.  Thursday morning one whacked me in the throat as I ran by, probably because I am the human equivalent of fly paper with insects stuck to my sweaty chest and face.  It’s like a bat buffet.  In the evenings we can see them come out at dusk from our balcony.  Mostly they are little bats, but there are a few monster sized ones we see occasionally.

We have seen lots of little pale geckos running around outside, and one in our kitchen sink that Gav had to rescue and release.  Yesterday we saw our first real lizard-nicely coloured and about 8 inches long.  This morning a similar one was hanging out on our gate.  He looked like one you would buy in a pet shop and keep under a heat lamp, but I guess that’s not necessary here!  I hope he decides to make that his hang-out place, he would be a good house mascot.

We were out walking the dog the other night and I saw what at first looked like a leaf kind of blowing sideways across the road.  There was no wind though…upon closer inspection it was a scorpion the size of my hand! 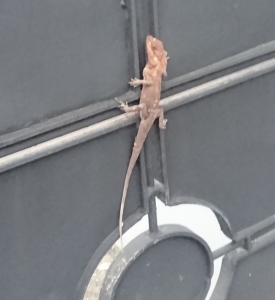 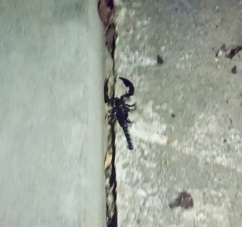 It was exciting but kind of scary.  Of course Gav was chasing it down trying to get a photo in the dark and Nell was very curious.  Then we started thinking, jeeze how many of these things are hanging around?  We better stop storing our shoes outside on the porch.  We have since asked around and apparently they are a)not very common and b)pretty harmless.

Mosquitoes, as you can imagine, are a big problem here at this time of year.  One of our new colleagues has already gotten Dengue Fever so, not wanting to be Newbie #2 to contract it, I have been spraying our bedroom and bathroom with an insect fumigation spray about an hour before bed.  Last week I went to brush my teeth and saw a very large cockroach on its back twitching away in the shower.  I felt bad that the spray didn’t finish him off, so sent Gav in with a shoe to complete the job.  That thing was so big that it sprayed actual GUTS on the shower wall that I had to wash off the next morning.  Usually I would prefer to just remove the offending bug to the outside, but I have learned my lesson with cockroaches.  Once, on vacation in Guyana, Gav and I were reluctant to use the giant can of Raid on a roach in our cabin, we just sort of shooed it outside.  We woke up in the middle of the night and that thing was nestled in bed with us.  Ever since then I just use the chemicals (or shoe as appropriate) and try not to feel too guilty.

As I type this post, I am getting Whatsapp messages from a new colleague who didn’t notice his towel was hosting a swarm of biting ants and just dried off with it.  He is in some pain, but very glad that he began drying off his arms first and not his crotch.  Way to look on the bright side!  Also I am glad it’s just a roach in my shower and not a swarm of biting ants.  Yet.