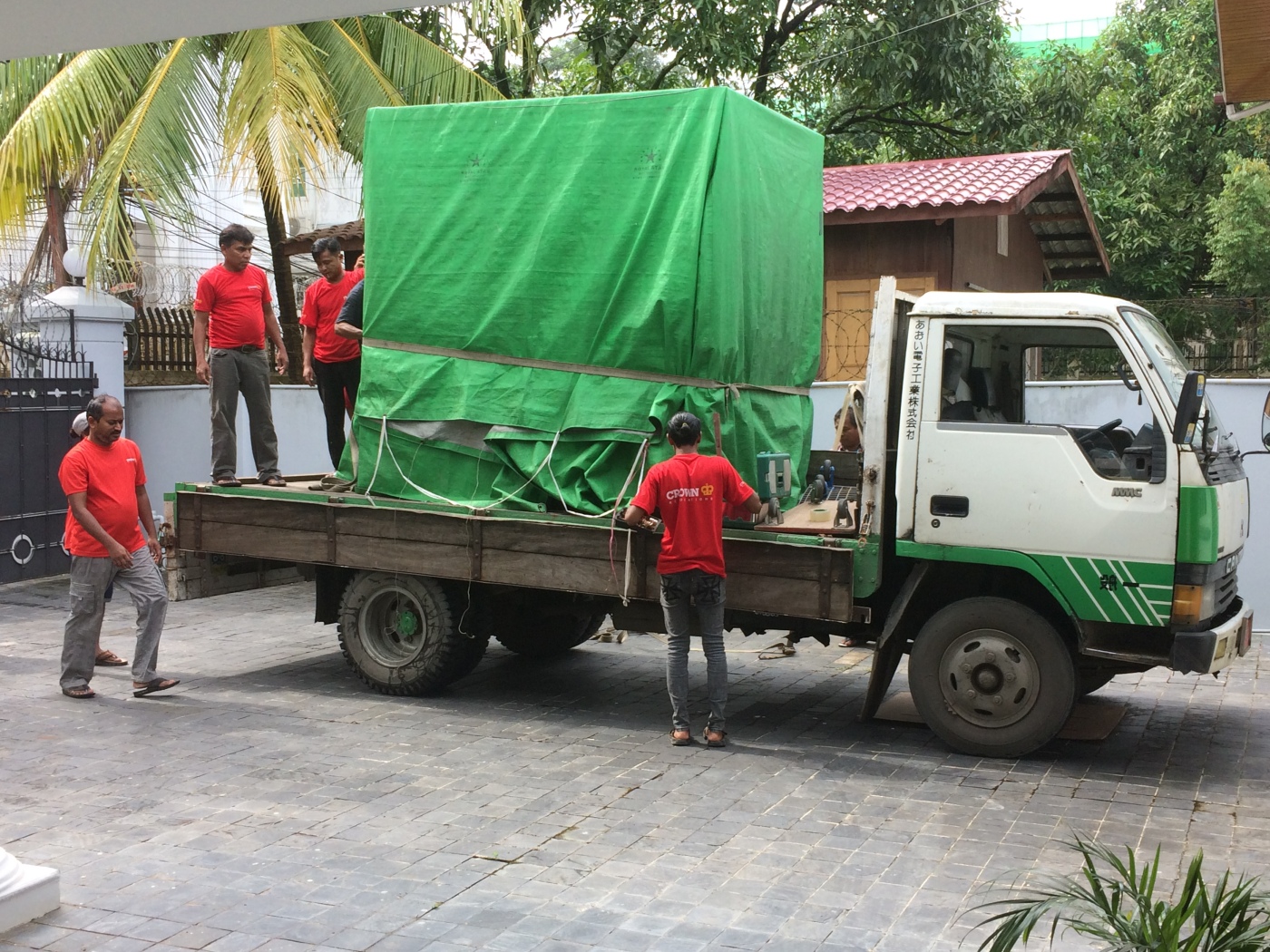 Yesterday was a very exciting day in the Ailbert household-our shipment was delivered to our house!  Since late June we have been living out of 4 suitcases, so we have been waiting and waiting to (hopefully) get all of our things and feel a bit more settled.  I say hopefully because apparently about 1 in 100 cargo containers falls off the ship and is never seen again!  This seems like an alarmingly high rate of failure, but it all turned out fine for us.

When we got packed up back in June, two very sweaty guys (England had an unprecedented heatwave this summer) turned up and spent about 5 hours boxing and wrapping up everything we were taking.  Some of the wrapping verged on the ridiculous as I saw them individually wrapping my face wash (that is in a plastic bottle) in brown paper to protect it, but they were very careful and took their jobs very seriously.  We had 54 boxes of things that we saw get loaded into the back of a truck and sent off to get put in a container to wait for a boat to Yangon.  We did a walk through to make sure they had packed everything we wanted, but failed to notice two of our favourite paintings still hanging in the kitchen, so we had to make a panicked drive out to their distribution centre the next day to add them to our pile of stuff.  And since then we have just been waiting for it all to arrive and then clear customs.  One of our fellow new teaching families got their shipment a few weeks ago which sent a wave of jealousy through the new staff, with all of us insisting that they needed to host a get-together so we could have the luxurious experience of drinking wine out of actual glasses and not random tea cups or water glasses. 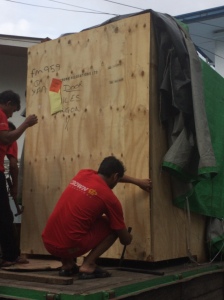 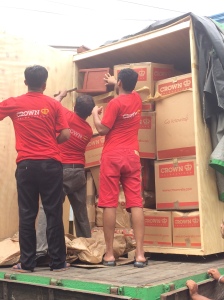 So, yesterday morning a giant truck came bundling down our pot-hole filled street to deliver everything.  Hilariously with the truck comes a special tool that the guys use to lift power cables out of the way so that the truck doesn’t take everyone’s electricity out on the journey, very thoughtful!  On this end, the company sent about 8 guys to open and unload our crate.  Everything was very officially sealed up in a giant wooden crate and we had to watch them open everything up.  Of course half the stuff inside was semi-unwrapped as there must have been some poking around by customs officials.  In 50 minutes all 54 boxes were brought in, unpacked and all packing materials were whisked away.  Amazing!  Well, amazing speed, but this was the method of “unpacking” that was used: 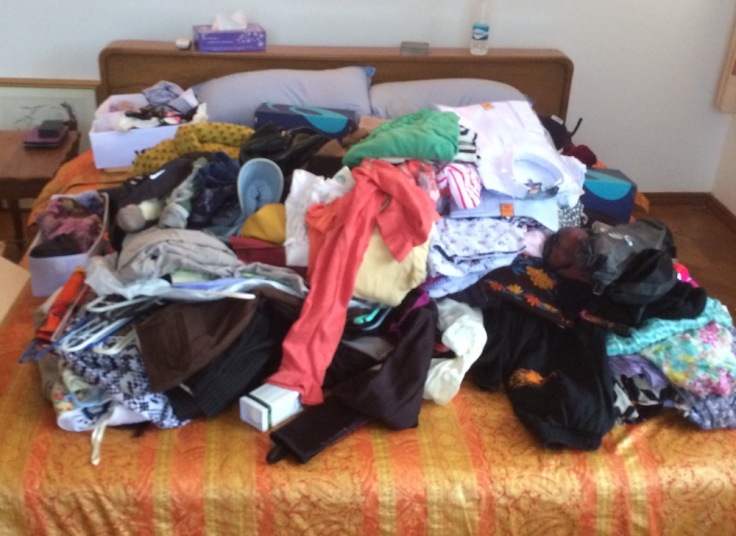 I did have many “what was I thinking?” moments during the organisation and putting away portion of yesterday.  For instance, do I really need three pairs of sweatpants in this steamy, steamy climate? When do I think I will use that nice pair of wool work pants? Good thing we brought an entire box of skiing clothing! Looking at it all made me vaguely nauseous as it was a particularly hot and sunny day, but I just shoved it all in a spare room’s closet and figured maybe it will come in handy at some stage.  It would have been nice if we had brought decent sheets instead of 20 sweaters, but hindsight is always 20/20!

The house is starting to feel a lot more like home now.  We had wine out of real wine glasses last night! We have Nell’s crate back, so no longer do we have to play the “what did she eat while we were gone” game that we have been playing these last few weeks (sample correct answers include an entire loaf of bread, a package of sugar, the contents of the bin, etc.).  The rooms are not quite so echo-ey.  And we have all of our nice pots and pans and tons of pictures to hang on the wall (after we have a video consult with our interior design guru Shannon).  But maybe most exciting of all is that I have my coffee cup.  I have been using a dinky tea cup that hold about 5 sips of coffee, it’s been real annoying.  For the past 12 1/2 years one of my most prized possessions has been a coffee mug that Gavin made me for our first anniversary.  Early in our relationship he broke a mug of mine that I really liked because it had a rainbow and a wiener dog on it.  I told him he had to replace it, but to get over the trauma of losing this particular mug that I loved, it had to have a rainbow, a wiener dog and also synchronised swimmers on it. Gav went to a “paint your own” pottery place with a bunch of 8 year olds and made me “Schubie’s Coffee Mug.”  I have loved that thing in an unreasonable way and have been terrified of the inevitable day when it got broken.  On the day we got packed up, Gav produced a new mug for me “Schubie’s Adventure Mug.”  This one has pagodas and synchronised swimmers and palm trees.  The original mug is safely in storage in Devon, and a new era has begun!  I realised the scene he painted was strangely prophetic as I used it this morning, happy on our balcony.

2 thoughts on “Our Stuff Arrives!”