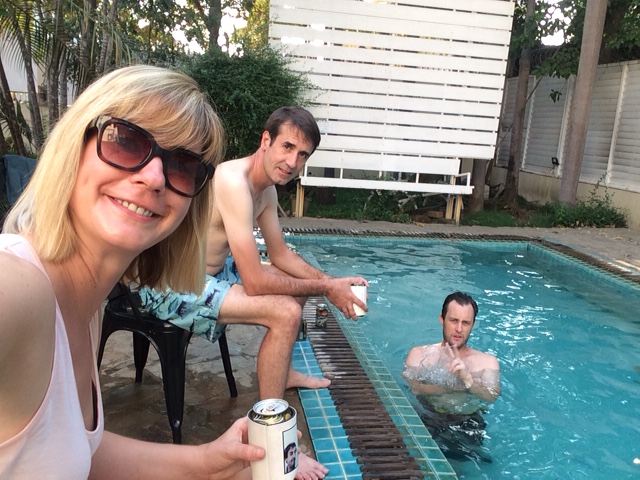 Despite that glamorous pool-side picture up there, we just had a fairly boring Spring Break.  We thought things were lame last week when we had the voluntary stay at home order, but the lameness increased incrementally through the week, with first a notice that gatherings of 5 or more were banned (punishment = 6 months in jail OR a £25 fine). Then a notice that there would be a curfew from 10pm-4am.  Then yesterday an order that you were not to leave your township, only one person is supposed to go on any errand (like to the grocery store), and you are supposed to wear a mask outside your house.  As with the last stay at home order, things seem to be observed with different degrees of laxness.  We went on a dog walk this morning (not our normal one as that one crosses into another township) without a mask but wore masks to the grocery store (in a fobidden group of 2!).  I went on a run real early that did cross into another township and there were no barriers but a friend when shopping and reported makeshift barriers in the street (that were no problem to get though).

So things here are becoming more isolated and more annoying and everyone of course has a lot of questions about what is OK and what is not.  There are not a lot of Burmese speakers amongst the staff, so people are trying to relay information through spouses or our poor head of Security who has now become the official go-to person about everything.  He used to be Mr. Myanmar, now he’s a walking FAQ section for clueless foreigners.  Oh how the mighty have fallen.

Well back before all this happened we had a little impromptu pool party at our friend’s house down the road on Easter.  It was your classic Easter get together, as long as you consider drinking Myanmar beer in the searing heat classic Easter fun.  Remember how all the shops were closed last week for the holiday?  I think we drank all his beer and it was only the first day the shops were closed!  We took pity and dropped off some new supplies for him, don’t worry.

Other than that, Gav did a lot of gardening, I did a lot of reading and not much else was accomplished.  I did learn how to make my own mayonnaise which I consider quite a feat!  Also I trimmed my own bangs.  so exciting. 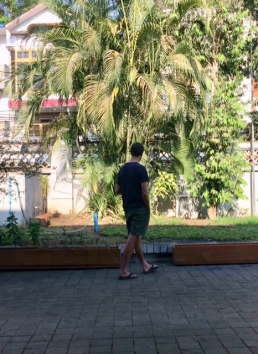 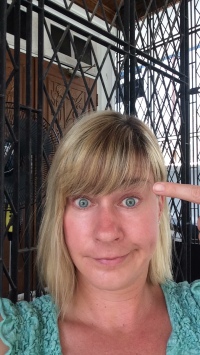 Having our outside space spruced up has helped us really enjoy our time stuck at home.  Too bad it’s about a frillion degrees here right now (daily highs are into the 100s), but with some rigged up fans we can usually sit outside in the shade and at least be in the fresh air.

Gav let me hang up some fairy lights outside our front door so we can linger out here after the sun goes down (at about 6:30 pm which I have gotten used to, but it is odd when you are used to the US or UK where warm weather means late sunsets).  So we don’t have it too bad.

The grocery store opened again yesterday, but we were able to put off going until today.  It wasn’t too manic, although now they are limiting numbers in and out.  You will all be relieved to know that we did not run out of beer, although of course we bought some more today just to be on the safe side.  Maybe today we will get on our scooters and do some donuts in our driveway just for fun, stay tuned!

One thought on “Spring Break”